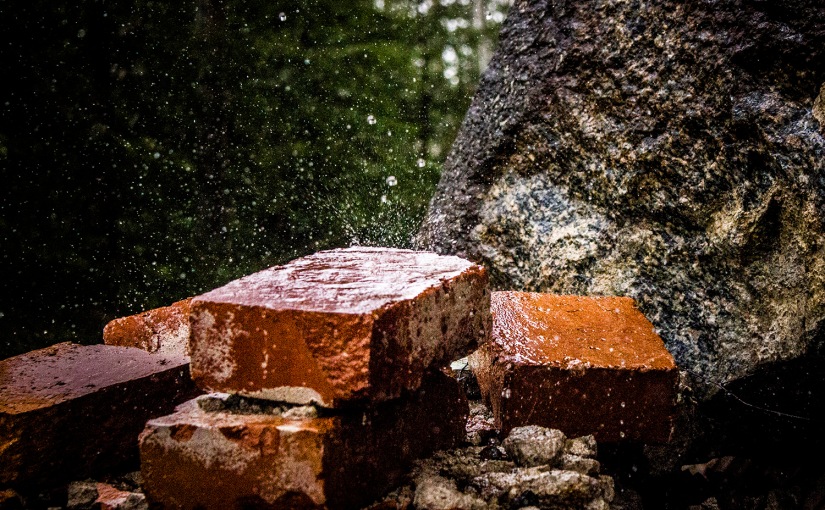 When John put his mother’s ring on my finger we both knew it was not a promise of a future together. I harbored no illusions of that kind – I knew he only dared do it because we were both aware, deep down, that we were never going home. We were going to die out there in the cold trenches, together or separated, and did not have to worry about conventions, laws and consequences.

I wish I still had that ring.

The war had been going on for ages, or so it felt. When I was first sent to the front I was young and stupid with my head full of star-spangled dreams and lies. When I met John what felt like a lifetime later, we had both seen, felt and heard enough to have learned that this was not our war – that it was no-one’s. And still we fought in it; I because I was afraid of the alternative, John because he had nothing to go back to.

I wish I could say that we gave each other hope, that us being together made the terror we lived more bearable, but that would be a lie. We suffered and we wept and despaired, and when there was pain that pain was not to be dulled by anything except sleep or death or the poisons we drank to attain one or both of them.

But John sang to me when I was drowning in panic, and I told him stories from my childhood when he hurt too badly. And we grew to love each other in a way reserved for the mad, the desperate and the dying.

I have never loved anyone since like I loved him.

It had been raining heavily that night, and when dawn came the world was drenched in mud and blood. This was the morning of long dreaded advance, of finally pushing desperately forward. The secret solace from the night before seemed like a long ago dream, and not even the ring hidden by my left glove could fully convince me that I had not in fact imagined it all.

It did not matter, however, because everything was to end very soon. I just did not know it at the time.

We left the relative but treacherous safety of the dug trenches and moved forth. I tried to keep close to John in the stealthy turmoil, but repeatedly kept losing sight of him. The sun rose behind the clouds and suddenly there was fire and explosions everywhere. We had been sighted. Our numbers scattered without any real semblance of order, and despite my best attempts to keep calm and sharp I found myself lost and terrified. I panicked.

That is how John found me. He screamed through the clamour that our unit was falling back and regrouping, that we had been ordered to take shelter in the ruins of a nearby church. He grabbed my left hand and started running, leading me towards safety.

It was then that the ground around us detonated, and everything turned into panic, pain and blackness.

I awoke to blindness in a world of horror and agony. There was not a part of me that did not hurt, and I could not see at all. Half convinced that I was in fact dead I lay there on my back, listening to the moaning, hurting voices of my compatriots all around me. Part of my mind realized that it must have been a bombshell or a hidden mine – the rest of me did not think at all.

Until I felt John’s firm grip on my hand again, that is. The pain in my entire body was excruciating when he helped me to my feet, but his warmth was so relieving that I almost did not acknowledge it.

“I will never let go”, he replied.

And then he led me slowly, carefully through the nightmare that I could not see, but the sounds of which will haunt me to the end of days. People were dying everywhere around us, screaming for help or relief or for people long gone. If someone had told me at that time that we were in fact walking through the fires of Purgatory, I would have readily believed it. Sound becomes a merciless paintbrush when employed on the canvas of the unseeing.

At long last we must have left the battlefield behind us, as the voices of the dying slowly faded into the distance. I was growing weaker with every step, and the steady flow of warmth down the side of my torso told me that I was bleeding badly from the explosion. Without John’s hand I mine I would have been terrified of fainting, falling or getting lost, but he never let go. Instead he firmly and calmly guided me across the uneven landscape on the other side of my personal darkness, stopping when I needed to but never for too long.

Then, suddenly, I began hearing voices again – but not those of the dying. I recognized those voices, and the relief I felt at hearing them is not to be described in words. I realized that we must have found the church that John had talked about in those final moments before the world ended. Someone called my name, another called for assistance and now, finally, my legs would not carry me any longer. I collapsed there in the mud and felt consciousness drifting away, even as running steps approached along with voices shouting medical commands.

I did not die that day, but was later told that it had been very close. I remained unconscious for a very long time, floating in an endless blackness only occasionally interrupted by brief spells of blurry, partial wakefulness. The only thing that kept me sane and calm during those short, confused moments was John’s reassuring and safe grip on my hand as he kept faithful vigil beside my sickbed.

Then, finally, I awoke one day and the darkness was gone. I blinked in confusion, and everything was made of sharp, searing light. At least almost everything; however intensely I tried to open my left eye, it simply would not obey me. A silhouette was standing in front of me, and at first I thought that it was John. But then the man spoke, and I realized that he was a doctor.

He told me that I had been lucky, that the shrapnel had only punctuated one of my eyes and that they had thankfully been able to save the right one. He then told me about several surgical operations and a long, long time of insecurity as to whether I would have the strength to wake up again. He told me that us even having this very conversation was a miracle in its own right. It was a riddle to all how I had managed, bleeding, blind and dying, to find and trudge my way back to safety.

“It was John”, I said in a voice rough from disuse. “He led me by the hand the entire way.”

I tried to squeeze John’s hand in mine, but I could not move my fingers. I wanted so badly to look at him, to see that he was alright, but my left eye was blind and my neck hurt too much to move.

“John Curtis?”, the doctor said, and even though I could only see him diffusely the tone of his voice betrayed his concern.

“Yes”, I said and even managed a defiant smile. Then and there I did not care what he knew or thought about us. In that moment I could have bravely and foolishly made John all those promises we had been too afraid to make before, and more. I hoped that he could hear this in my voice – that they both could.

The doctor was silent for a long time, and when again he spoke his voice was grave and worried.

“You must be mistaken”, he said. “You came alone. I saw it myself.”

At this I laughed and shook my head, actions both of which sent pain shooting through my body once more. But I did not care, this was all too absurd. Still smiling broadly, I turned finally to my left to meet John’s gaze. But he was gone. I stared in confusion, knowing that he had been there, holding my hand, just a moment ago.

The doctor, mistaking my sudden silence for something else, hurried to my side and put his hand on my right shoulder. “I am sorry, son, I should have told you sooner. You must have lost it in the explosion, and when we found it the day after it was too late to do anything. But everything has healed beautifully, and with some training you should be able to–”

But I was not listening to him anymore. I had let my gaze wander downwards to where my left arm should have been, and was now staring in shocked disbelief at the bandaged stump that had now taken its place.

“But… But John, he was… Right now, I…” I realized that I was rambling, but my thoughts simply would not come together. He had been sitting there, right beside me, holding my left hand. And now they were both gone.

“I am terribly sorry, but John Curtis is dead”, the doctor interrupted me. “He was killed in the explosion that took your arm. In fact, that was how we found it. Even in death he was holding on to your left hand.”

They sent me home after that. I do not think that they would have reinstated me into service even if my body had been intact, since it must have been so painfully apparent that my mind was not. I do not know what happened to the ring, and have only presumed that someone must have stolen it. It was never returned to me, at the very least.

I went to John’s funeral and met his estranged parents and siblings. I told them that I was a friend, and saying those words hurt more than I had thought it would. I exchanged a few polite stories with the grieving family, but left soon after when it became painfully clear to me that we were not even talking about the same person.

This was all a long time ago now. I eventually learned to live with one arm and one eye, and nowadays I barely reflect upon the loss at all. The only reason, however, that I am able to live with a heart irrevocably split by sorrow, is that I know that the other half of it is never far away – just as despite all I still know that John Curtis saved my life on that cursed day.

Because every day and every night since then, however far I walk and wherever I may go, as soon as I close my eye I feel it; John’s strong fingers lacing together with those of my missing, left hand, as he walks beside me to the end of days.

This story was written in response to a title writing prompt, as part of my and Aurumsella’s take on the #52weeks52stories challenge.

6 thoughts on “The Missing Limb”