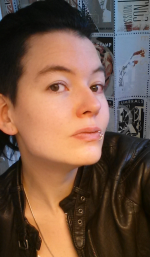 She was born in shadow and in blood, but that was long ago when the tall firs were sprouts and the ways of men were different. She was taught to live and let die by a monster with a heart, and the years saw her changing and hardening with every drop of red that forever stained her gentle hands and lips.

Her monster was a poet and a thief, and he had stolen her life without a second thought after hearing her recite his work in the house of God, and instantly falling in love with the sound of her voice. She herself was a singer and a romantic, and she had let herself be stolen without a struggle, after drowning helplessly in his eyes and instantly realizing that this was a death she did not wish to be liberated from.

Every night was dark poetry as the monster guided her through a world transformed by her hunger and by her innocence lost, and every day was sweet oblivion as he cradled her dead body in his just as lifeless arms. There was no shame, there was no remorse. If there was anything, there was art and they both reveled in it just as they reveled in each other’s company and in the blood that flowed like ample wine wherever they went.

The sprouts grew into saplings and men learned to worship the gods of science and enlightenment. There was never a shortage of affection in her still heart, and she looked with anticipation into this new night where she would follow him unafraid and with eyes wide open. He, however, the monster who had stolen her heartbeat and brought her this far beyond the life spans of all she had ever known and loved, who had seen her bury parents, sisters and brothers and who was now her only anchor in a world gone mad from industrial hubris, was silently losing faith.

He was a poet, but in this new world there was no room for words like his. The stories of this new century were not his stories, and the proud name that had once been on everyone’s lips was now only whispered by her, his stolen love, as she desperately tried to ease his pain and sorrow.

There was war, there was revolution and nobody any longer remembered the rhyme and verse of a dead monster whose words had once given birth to the thoughts of dreamers and the bravery of lovers and warriors. Together they had defied time and seen the fall of kingdoms, but now she was slowly watching oblivion do to him what death had never been able to accomplish. He was withering away before her eyes, and despite her best efforts to drag him with her into the brave new world it soon stood clear that he lacked the bravery – or the will – to follow her there.

“If I can’t get people to remember me, then what do I have?”, he said to her by twilight on that fateful, final night. ”We are creatures of shadow outside of time, doomed to watch the world change and our footprints in the sand fade away. I do not know this new world, I do not understand its struggles and its victories. Even my name has been taken by the waves, there is nothing left for me here.”

She silenced him and sang to him. They cried together for everything that had been lost along the way. They kissed and they loved and then she fell asleep on his arm, content that she had been able to reach him in his darkness and that everything would be alright. She would help him find the words that he had lost, just as she would make the world again know his name.

When again she woke, he was gone. In the moonlight outside she found his golden ring, resting silently amongst ashes that were slowly being carried away by the wind. He was gone. The new world was beginning, and she was alone.

The saplings grew into tall firs and men learned to worship the gods of machine and profit. She was born in shadow and in blood, but that was long ago when she was taught to live and let die by a monster with a heart. Now the years saw her changing and hardening with every drop of red that forever stained her gentle hands and lips, and she had long since sworn by that same red that she would never love again.

This text was inspired by a writing prompt, and is the first part of a story split in three. Stay tuned for the next part!