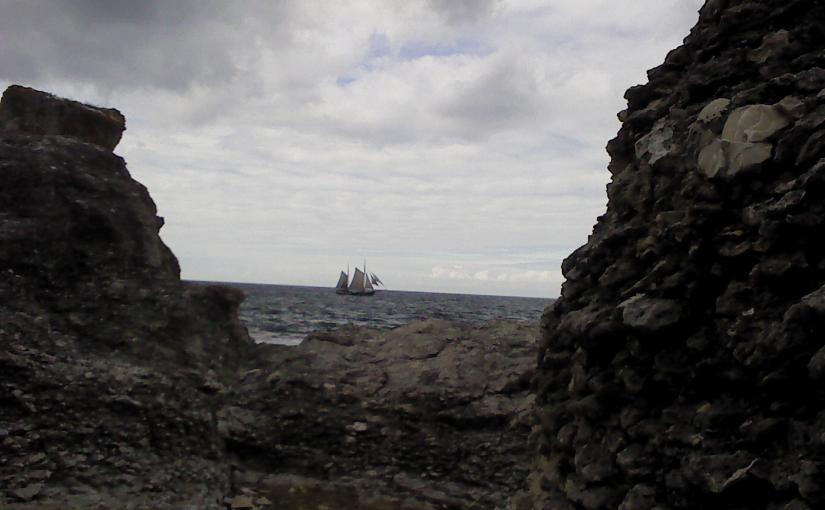 This text was written in response to a writing prompt, and I suggest listening to this music track while reading it to get the right atmosphere. Feel free to leave comments and feedback!

Second lieutenant Steward Whitewall of the offshore patrol vessel USCGC Carolla watched from behind his desk as the thick fog on the other side of the window engulfed the craft in a grey nothingness. He could hear the engines slowing down their pace somewhere in the depths below him to match their careful cruising speed, and checked again that his equipment was active and working. He was the radio operator of this ship, and would have to be extra attentive now that the visibility was limited.

On his radar he could discern smaller vessels out there in the unknown void, but they kept their distance and seemed to be already making for shore. But the Carolla was a steady thing, built to last through conditions much worse than these, and they had a broad perimeter to screen before returning back home. Their equipment was top notch, and they should not encounter any problems navigating through the mist.

He desperately wanted a cup of coffee, but this was not the time to go get one. He would have to wait until he was relieved in another thirty minutes, and settled instead for chewing at a mint toothpick to ease his restlessness. It was not his main responsibility to keep track of the radar – the people in Navigation took care of that – and Steward focused instead on listening in on the various messages broadcasted across the ether by other operators like him.

The yacht Sabrina was having engine problems two MI to the east, but was shortly aided by a nearby cabin cruiser called Sunset Dream. Other smaller vessels could be heard calling for help with navigation, and Steward dutifully called out the Carolla’s position to avoid risking a collision course. He, of course, knew that none of the civilians were even close to their coordinates, but had been taught to be thorough in the performance of his task.

He checked a couple of other frequencies just to be sure about not missing anything, and reported ashore about the distress of the Sabrina just for the sake of it.

When next he looked to the radar screen, all the smaller vessels seemed to have left the area. This was of course a good thing, but something didn’t feel right. He had only looked away for a couple of minutes – there should be at least a couple of ships still out there, even if most of them had made it to shore. He checked his equipment again, but everything seemed to be in order.

Steward looked to his watch and sighed. Still ten minutes until the arrival of his replacement. He would have to deal with this. He pressed the microphone button of the ship’s intercom and called out for Navigation. Only static awarded him from the other end of the line. What the hell was this? Did they have some real technical problems, after all?

Then everything went completely silent as the rumbling of the engines slowed up even more and finally stopped completely without explanation. He tried the intercom again, switching to the general channel this time. He could hear indistinct voices amidst the deafening static, but was only able make out incoherent snatches of what was being said. One thing was made clear, however: there really was a problem, and it seemed to be serious.

He hastily switched back to the outward communication channel and started sending out information about their coordinates, their speed and an indication that they might be experiencing some kind of problem. He could not be more specific than that without being further informed himself, and waited impatiently for the ship’s command to send him a message or a runner to inform him of the situation. Because one thing was obvious, at least: he could not abandon his post under these circumstances. But no message came, not even a response to his broadcast. And outside his window the mist was thickening, embracing the vessel and making him feel completely isolated from the world.

Then the silence was suddenly broken by a crackling in his headphones. Someone was trying to reach him through the radio, someone from the outside. Frenetically he tried to tune in on the message, desperate for a human voice to break the deafening silence that closed in on him from all sides.

At the same time he suddenly noticed a single dot on the radar, approaching the Carolla at a steady pace. He had to warn them, he had to tell them they were there in the mist. Couldn’t the strange vessel see them on their radar? It seemed like a large ship, surely they must have equipment to match their size? And that’s when he finally found the right frequency, and realized that the message was being broadcasted from the approaching ship. And his blood froze.

”…the United States Coast Guard. We are on a collision course. You have to veer starboard. I repeat, veer starboard, over”, the voice on the radio said.

Steward Whitewall just stared in horror as a large shape drifted forth from the heavy mist, straight towards them. He could hear the shrieking sound as parts of the Carolla’s broken machinery struggled painfully to life, trying to make one last yaw – but it was too late. The dot on the radar closed in on them, and on the other side of the window the other vessel now towered over him like a growing nightmare from Hell.

But it was not the imminent collision that made him numb with fear. No, it was the voice in his headphones – a voice he recognized very well. He slowly stood up as the other ship made a sluggish attempt to veer away, and that’s when he saw the impossible. On the vessel’s larboard side was written in high, crumbling letters its name. He took a deep breath, and the message repeated in his ears.

”This is Second lieutenant Whitewall at USCGC Carolla, the United States Coast Guard. We are on a collision course. You have to veer starboard. I repeat, veer starboard, over.”

Then the broadcast lapsed into static again, just as the rumbling impact shook the entire ship and threw the world into chaos. Stewards screamed with the dying ship, picked up his chair and smashed it against the radio transmitter. A horror he had never thought possible took hold of him, and he ran though the door, desperate to get away from this impossible nightmare.

And in his head continued to ring the voice that had spoken to him across the ether. The voice of the operator at the ship which had stolen the Carolla’s name. His own voice.